Discover the plateau of Fraisse and Moudeyres 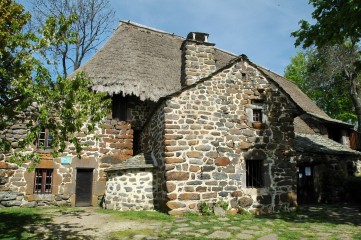 At about 20 minutes away from Le Puy-en-Velay, cross the PR 590 on the plateau of Fraisse. This tour long of 11.2 km starts from Laussonne. Enclosed in the heart of the valley situated between the massifs of Mézenc and Meygal, the village is crossed by the river Laussonne. This stroll will make you climb to the heights of the village by some pleasant paths but with differences in level sometimes hard (about 200 meter of difference of level separate the village center from the summit of the plateau).

But as any effort deserves a reward, once the plateau of Fraisse reached, your eyes will be enchanted by the vicinity landscapes… In turns, you’ll discover the massif of Meygal in the North with the Testavoyre and its 1436 meters of high, the valley of L’Aubépin and then, in the South, the massif of Mézenc, the mount Alambre…

If you fancy extending (a little bit) your excursion, do not hesitate to visit the village of Moudeyres with, especially, its houses thatched roofs, its ecomuseum situated in the ferme des frères Perrel (farm of the Perrel’s brothers), a must see for about 1.6 km two-way trip!

A trip back at the water’s edge

For the trip back, near Moudeyres, you’ll walk a little on the GR 430 Chemin de Saint Régis (Way of Saint-Regis), then leave it to go back down by following the river Laussone which will lead you directly to your starting point, in the center of the village.