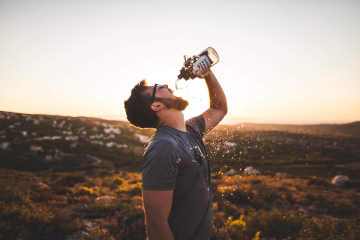 Drinking during a hike can seem obvious! Read here our pieces of advice to stay hydrated and avoid any accidents link to lack of water.

The water represents around 70% of the body’s weight and this rate has to stay the most steady possible. The water baths the cells, insure the good fluidity of the blood which brings to them nutritive elements and expel their waste. It regulate the body’s temperature which has to remain constant around 37°C.

The sweat is one of the only ways to evacuate the excess heat (due to the room temperature or produced by the organism during an effort). To well understand the rules which determine a good hydration, it is necessary to well estimate the water needs of the organism and to adapt the intake to balance the losses.

We never drink too much, the excess is eliminated without inconvenience, the quantity of urine and its concentration are some good indicators of hydration.

What are the organism’s water needs? 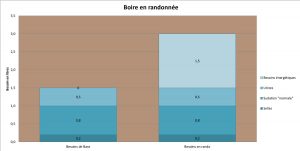 Apart from any activity, the organism needs to counterbalance its usual losses:

One simple addition and we arrive at 1.5 l., organism’s minimum need of water aside from any effort!

The needs induced by the effort

The organism is a very poor return machine: 75% of the energy produced to provide the effort is transformed into heat and its calories must be expelled to avoid any rise of the central temperature.

If we only add up the daily needs and the needs of the effort during the hike, our needs already set at 3 liters on average!

The needs link to the climatic conditions

Temperature and humidity/dryness of the air can modify the needs.

In the desert, it’s hot and dry, it doesn’t feel like perspiring and yet, the evaporation is enormous. A severe dehydration can occur in a few hours. A study showed that the needs during a hike in the desert, where it’s hot, are around 9 to 14 liters of water!

In a tropical environment, the high level of heat and humidity make the progression more difficult, the needs of the organism become important.

The dryness of the air, even without any heat or effort, can be a source of dehydration. The Tibetan monks drink, on their high plateaus, aside from any exercise, around 35 cups of tea a day, being around 8 liters.

How to compensate for water losses

To simplify our presentation, it will be considered that mineral salts lost along with water will be brought by the normal diet. Therefore, it is sufficient to replace the water lost by water, in all its forms.

Where to find this water?

In the daily nutrition. Certain foods as citrus fruits or tomatoes contain more than 70% of water, the drinks called energy drinks, coffee, tea, broth but mostly water. It’s not always easy to carry the necessary quantity for a summer day: carrying 5 liters is heavy, one gives it some serious second thought.

It is often possible to restock along the way, either at a fountain or a stream. In the latter case, do not forget to add a little disinfectant tablet and leave it to work for about an hour so that the water becomes drinkable.

When should one drink?

For a start, drink before the beginning of the hike, then, it is better to drink a few sips every half-hour than a big amount of water during less regular breaks. Hence the interest of devices to drink without having to put down the backpack (water bag, pipette…) especially when hiking in a group.

Above all, do not wait until you’re thirsty to drink!

During breaks, stay hydrated with the packed food and drinks. Absorb 1.5 l. of liquids during a “normal” of several hours seems to be a reasonable minimum.

And the evening, upon arriving, drink abundantly to compensate for the almost inevitable deficit of the day (hence the interest of soups)… During winter, think to drink hot beverages (interest of thermos).

How does dehydration manifest itself?

First of all, an unexplained, intense tiredness (a deficit in water of 2% of the body’s weight leads to a decrease in energy of 20%). The thirst, sometimes but not always, little or no urine emitted, dark coloring.

What precautions need to be taken, apart from drinking?

Those are common sense rules!

What are the accidents link to dehydration?

The heat (endured or produced by the effort) has to imperatively be evacuated so that our organism stays at 37°. How is it evacuated? The blood carries it from the center to the extremities of the body where it is cooled down by the skin’s sweat.

If the blood is too thick for lack of water, the cooling system will get blocked and we are heading for trouble, from the most minor to the most serious.

They can occur during a very intense effort which makes sweat, even if it’s not hot.

Two factors combine: extreme heat, the more often with high insolation, and extreme dehydration. At rest, one can feel a severe fatigue often accompanied by strong headaches, nauseas and cold sweats. The skin is moist and cold, the temperature stays normal.

Rest during at least twelve hours in a dark and fresh room. Gradual compensation of the deficit, in water as well as in mineral salts: sparkling water, Coke, broth… before resuming progressively a normal activity.

It’s the most serious accident that may occur. It isn’t necessarily sunny but the ambient temperature is often high with, sometimes, a high level of humidity. The dehydration becomes so intense that the thermal control breaks down. There isn’t anymore any perspiration or cooling of the blood. Same symptoms than for the sunstroke but with two major differences: the skin is dry, the temperature high.

Without any treatment, one can die. Put the patient into the safety position, cool him down by all means (cold cloths, cold baths) and call immediately the emergency services (18 or 112).

But you won’t come to this… with a regular and abundant hydration during the day, and even more in the evening, at the end of the hike, you will be able to compensate the deficit.

And about alcohol some will ask! Drinking and/or hiking?

There isn’t any good physiological reason to drink alcohol while hiking: it doesn’t warm up and rather increase the risk of accident and, on top of that, alcohol dehydrates… If, for the convivial moments, it matters to you, save it for the end of the day only, after exercise and with moderation!